OUR STORY OF PLACE

The original 340-acre tract of land known as the Schiff Nature Preserve is located in Mendham Township and Mendham Borough, Morris County, New Jersey. Today, Schiff has grown to encompass 768 acres of land in the Mendhams and Chester, and has four nature preserves under its full or partial management.

Much of Schiff's property is contained within the Ralston Historic District, which is listed on both the New Jersey and National Registers of Historic Places. Click here to learn more about each preserve >

Native American artifacts have been found along the rivers and streams. The local Lenni Lenape probably used the sheltered valleys to provide trail corridors and food resources. In the northwest area of the preserve, just above where India and Burnett Brooks join to become the North Branch of the Raritan River, a pile of rocks presents a hint of an encampment or shelter. It is possible that there were outlying hunting camps on the steeper slopes of the Preserve.

A long-standing oral tradition locates a Revolutionary War outpost on a hilltop in the northern section of Schiff. This outpost was supposedly utilized c. 1779-80 when the continental troops were in an encampment at nearby Jockey Hollow and may have served to protect the old Mendham-Gladstone Road through the Raritan River pass. A large pile of stones and low ridge of earth and stones extending along the hilltop ridge have not been verified as being part of such an outpost. The Old Colonial Road is another undocumented 18th Century feature of the Preserve. It allegedly served as a link between the Revolutionary War outpost in the area and the Jockey Hollow encampment. This historic wagon path is now little more than a broad hiking trail. It rises up a gentle grade from Roxiticus Road and the valley of the Raritan River.

In 19th century atlases, the Colonial Road is listed as a private road with a 19th century house identified as the "Geo. DeVore Estate." Today evidence of cut and dressed stone foundations and cellar holes suggest that a main house occupied a 300 foot stretch along the South side of this roadway. The remains of a second 19th c. house are located in the river valley just north of the trail leading off of Union School House Road. A gristmill stone forms the base for a flagpole at the northeast end of the Great Meadow. It originated from a presumed 19th c. mill upstream from Schiff's main entrance. 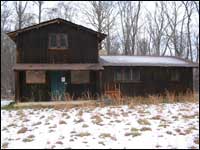 The original owners of the property, R.H. Williams family, acquired the land in piecemeal fashion in the early 20th c. from numerous descendants of early settlers. The main entrance bridge and four other false arch bridges with cut stone facings were constructed to correspond with the Eclectic Revival Style manor house, built by Richard H. Williams and visible as one approaches Schiff's entrance from the east. A second estate-era landscape element on Schiff was a racetrack for horses located in the Great Meadow.

The present Nature Preserve is part of the original Schiff Reservation which was donated to the Boy Scouts of America by Therese Schiff in memory of her son Mortimer Schiff in 1931. (Read about Jacob Schiff here.) Additional components of the 20th c. at Schiff are the Boy Scout era-buildings and the scout-made trails. Of the nineteenth century buildings that came with the property, only the River House survives today, at the comer of Pleasant Valley, Union Schoolhouse and Mosle Roads.

Dedicated in 1933, the Boy Scouts named the property the Schiff Reservation and developed it into its national Boy Scout Training Camp. From this location the famous "Green Bar" Bill Hillcourt, Scoutmaster of the Mendham Troop, and others worked on the Boy Scout Handbooks, Boys Life Magazine and numerous field manuals and nature guides.

The Dan Beard Cabin, named after the first National Scout Commissioner, was originally part of a Boy Scouts' Service Camp that was constructed for the 1939-40 New York World's Fair. At one time a film studio was adjacent to the present location of this cabin. This film studio was, at one time, the largest film studio on the east coast. The studio was a gift of the artist Norman Rockwell and Thomas Watson of IBM. Norman Rockwell's famous paintings were on permanent display for a time and he was known to have used the Schiff Reservation as the scenes for some of his famous paintings. The Wood Badge Lodge, built in the 1960, the Marge Davidson Administration Building (now the Nature Center) and the Dan Beard Cabin are the last Scout facilities remaining after the sale of the property in 1979.

More important than the famous personalities who have come to be associated with the property is the fact that the Schiff Reservation served the Boy Scouts of America for nearly 50 years, and in so doing became more than just another tract of land. It was the home of the Boy Scouts of America, a living monument to our youth and the importance of teaching our youth about the environment and the role they are expected to play in preserving it.

Boy Scouts Move, and the Preservation of Schiff Begins

In 1979, the Boy Scouts of America moved their headquarters and national training center to Texas and sold the land to AT&T. The future of the Schiff Reservation then went through a long period of uncertainty. In the early 1980's, a group of neighbors, in true grassroots fashion, formed Citizens for a Residential Mendham to keep the property from being developed by AT&T. When it was in danger of being developed again in the early 1990’s another group, Schiff Reservation Preservation, rallied concerned neighbors again.

In 1993, Jackson Homes stepped in to complete a residential development project. The firm purchased the land with its existing zoning restraints, which established a balance between building and open space. Over several years, David and Suzanne Jackson succeeded in broadening their building plan while, at the same time, meeting many of the conservation goals which had delayed and, ultimately, defeated large-scale commercial development.

In 1998, when Schiff Natural Lands Trust took title to 310 acres of the original 500, the original boundaries of the reservation on the east were shifted farther eastward toward the borough of Mendham with the addition of 40 acres, donated by the Farrelly family. The adjoining private land donated by the Farrelly family had increased the trust's holding to about 350 acres. These were declared permanent open space by the Schiff trust, to be kept in a natural state for the public to enjoy in perpetuity.

Many people strived to save Schiff from development and have become legendary in the stewardship of open space. Of those, names like Catania, Davidson, Farrelly, Hayden, Parker, Porter, Thomas, and Willemsen stand out. Their individual efforts were supported by the far-sighted involvement of the Mendham Township Committee and Planning Board, as well as the grassroots work and public relations efforts of scores of individuals in the area. These were the major resources which braked and redirected an intrusive development plan to privatize 500 acres.

Today, Schiff continues to grow beyond its original 310 acres. Now at 768 acres, Schiff is a model for the power of community-based conservation and is known throughout New Jersey for its stewardship, education and community involvement.

In 2011, Delphine Slotten, one of our teen volunteers, wrote her extended essay for her International Baccalaureate program about Jacob Schiff, the philanthropist whose wife donated the money for the orginal tract of land that eventually became the Schiff Natural Lands Trust. She was kind enough to allow us to post it here.